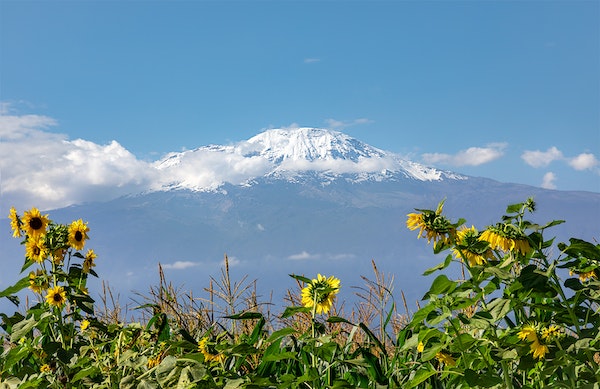 Kilimanjaro is the highest mountain in Africa at 19,341 feed (5,895 meters). A number of theories exist about the meaning and origin of the name. One being a mix of the Swahili word Kilima, meaning mountain and the KiChagga word Njaro, loosely translated as whiteness. Another is that Kilimanjaro is the European pronunciaton of a KiChagga phrase meaning "we failed to climb it".

Kilimanjaro is one of the Seven Summits (the highest peaks on the seven continents). Kilimanjaro rises from its base approximately 16,732 feet (5,100 meters) from the plains of nearby Moshi, making it the tallest free-standing mountain in the world.

Mount Kilimanjaro is located in Tanzania in east Africa, within Kilimanjaro National Park. Those wishing to climb the mountain depart from nearby Moshi, which is a small town close to Arusha in Tanzania.